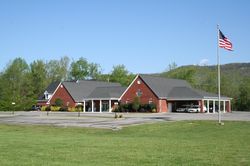 In 1987 Randy Tate began his career helping families of this area at the former Sequatchie Valley Memorial Funeral Home in Kimball. Over 20 years later he felt the families of the area deserved a new modern facility and in August of 2000 opened Tate Funeral Home, LLC in Jasper to help those during their time of need.

2008 brought many changes to the Tate Funeral Home, LLC. Former Sequatchie Valley Memorial Funeral Home in Jasper reached the difficult decision to close after many years of service. Mr. Tate agreed to honor all pre-planned funerals with the former firm. Once again Mr. Tate found himself helping families from where he began his career thirty years ago.

Today we strive to be the best provider in Funeral Services. We were just recently voted The Best Funeral Home In the Sequatchie Valley and Mr. Tate was just voted the Best Funeral Director in the Sequatchie Valley 2017. We offer a wide range of different Funeral services cremation, burial and monument services. We pride ourselves in the fact that we only offer American Made Products. Mr. Tate is proud to be a part of such a great community of families. Tate Funeral Home, LLC is a Single Family Owned and Operated Facility. Mr. Tate looks forward to expanding his business in the years to come; offering a larger kitchen, ample parking and many areas that will be changing with technology. Our Staff wants to offer our Sequatchie Valley Families the best. Tate Funeral Home, LLC can help you honor a life well lived and forever remembered.

A year of daily grief support

Our support in your time of need does not end after the funeral services.  Enter your email below to receive a grief support message from us each day for a year.  You can unsubscribe at any time.